What Is Obsessive Compulsive Disorder (OCD)? 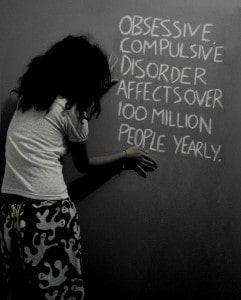 Obsessive Compulsive Disorder (OCD) is a distressing anxiety- related condition that leads the sufferer to act out obsessive compulsions and urges.

It is recognised by the World Health Organisation as one of the top ten most disabling illnesses in terms of diminished quality of life and loss of earnings, and causes distress to sufferers and family member’s alike.

The symptoms of OCD are varied but do follow a recognisable pattern. The sufferer will become troubled by intrusive, unwanted, and disturbing thoughts. These thoughts are incredibly difficult to ignore and become increasingly upsetting and troublesome.

These disturbing thoughts often take the form of serious harm befalling the sufferer or a loved one. The sufferer will know that their obsessional thoughts are irrational, but believe that the only way to control the thoughts and to relieve the distress they cause, is to perform compulsive behaviours.

These compulsive behaviours may take the form of excessive hand washing, obsessive cleaning, checking and rechecking that lights are turned off. The behaviours may be more ritualistic in nature, and may include opening and closing a door a certain number of times before leaving the house.

But unfortunately, any relief that the compulsive behaviours or rituals provide is only temporary and short lived, and often reinforces the original obsession, creating a gradual worsening cycle of the OCD.

The Double Whammy of OCD

One of the more distressing aspects of OCD is that even though the sufferer knows their thoughts and obsessional behaviours are irrational, they are utterly compelled to carry them out. In OCD the logical mind remains fully functional and so recognises the irrationality of the behaviours. This recognition can lead the person with OCD to feel out of control, which subsequently leads to depression.

OCD is diagnosed in a patient when the obsessions and compulsions start to consume an excessive amount of time, usually an hour or more. Or when the obsessive and compulsive behaviour cause significant distress, and when the actions interfere with a person’s work, family life or social life.

The causes of OCD are unclear. What is clear is that in 80% of cases the symptoms of OCD have presented themselves before the age of 18. It then takes an average of 10 – 15 years before the sufferer seeks much needed help. Often this reluctance to seek help is because of the intense feelings of embarrassment, guilt and sometimes even shame associated with their behaviour.

Research has speculated that there may be a genetic link, and that OCD may possibly be an inherited condition. This is not yet proven but what is clear is that OCD is linked to issues associated with reduced serotonin levels within the brain. Serotonin is a chemical essential for the transmission of messages in the brain. Reduced levels can inhibit how the brain performs and lead to depression, anxiety and OCD.

Get Help Now With OCD, Contact The Affinity Centre, Cheadle

If you suspect that you or a loved one is suffering with the burden of OCD then we would encourage you to seek help. Making contact with The Affinity Centre could be the first step in beginning the journey to recovery from this complex but treatable condition.

Read The Book: Break Free from OCD: Overcoming Obsessive Compulsive Disorder with CBT* This book is written by one of the most respected experts in the country on OCD, Paul M Salkovskis.

There are many websites on the internet that provide information and support for sufferers of OCD.  Click the links below to be taken to the selected website.

Keep up to date with The Affinity Centre

Please enter your name.
Please enter a valid email address.
You must accept the Terms and Conditions.
SUBSCRIBE

Thanks for subscribing! Please check your email for further instructions.

Something went wrong. Please check your entries and try again.